Fedena Posted on March 4, 2020 Posted in All Blogs No Comments Tagged with Cloud-Based Gaming for K-12 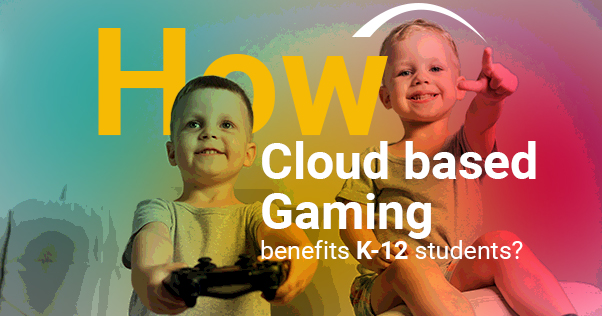 Cloud based gaming is a common hobby and daily routine for most of the K-12 students across the globe. All it requires is a fast internet connection and good mobile, tablet, PC or dedicated gaming device. Most of the games’ basic versions are available for free and now a days it requires minimum learning or training to start playing a game. There are debates going on about whether it is good or bad for the K-12 students to play games online. Many researches are conducted in this field and almost all the time the games are proven to improve learning skills.

The games are also found to help the concentration skills of children with difficulties in maintaining focus and attention.

What are the benefits of cloud based gaming?

According to various researches done the cloud based gamings are found to improve the following skills of K-12 students:

While playing games that engages the students’ attention completely and immerses them in the narrative and play of the game, the students learn to concentrate and pay their attention to a single task or goal at a time. This helps in studying and learning without distraction with improved concentration and attention. Along with improving the concentration, the games can also teach multitasking skills based on the narrative and genre of the game. As concentration is like a muscle that can be strengthened by working it out, cloud based gaming improves the concentration. Also instruct the students to take regular breaks to decrease the side effects on eyesight and body posture.

Playing a game demands memorizing skills. Most of the games, the instructions are given in advance or the hints are picked up as the game progresses. This must be memorized to navigate the game successfully. This will have both visual as well as auditory memory requirements. Visuals can be symbols or languages. As students play games that demand their memorization skills, the memory power increases automatically. Simple classic games like crossword and sudoku improves memory. While selecting games on cloud, look for games developed based on the principles of these memory enhancing games.

All of us might have observed it. The students who play games on the computer develops computer fluency faster and become experts. Downloading and setting up a game, configuring the basic settings, troubleshooting problems, updating the game, etc. are good practices for building computer fluency. When they try doing this across multiple platforms they learn the different computing platforms too.

Almost all the games are played using eyes and hands. This requires a lot of hand eye coordination to progress through the game. As the game levels get higher, it demands much challenging hand eye coordination. Through repeated trial and error in these games, the hand eye coordination of the player improves and it also helps them in all activities outside games. This is also proven by scientific research. A study led by University of Toronto psychology researchers has found that people who play action video games such as Call of Duty or Assassin’s Creed seem to learn a new sensorimotor skill more quickly than non-gamers do. All studies reach the conclusion that playing these games requires reacting quickly and accurately to events that happen on the screen. This suggests that playing action video games benefits hand-eye coordination.

Playing video games actually boosts both fast as well as strategic thinking. There are fast paced action games genre and strategic or tactic gaming genre. The strategic gaming genre promotes strategic thinking in its players. The scientists of Queen Mary University of London and University College London (UCL) discovered that those who played StarCraft(strategy and tactic based war game) were quicker and more accurate in performing cognitive flexibility tasks than those who played The Sims(Life simulation). The scientists of the Max Planck Institute for Human development concluded that playing the video game sparked neurogenesis (the creation of new neurons in the brain) and an overall increase in grey matter (where nerve cells are located).

This is a benefit aware to all gamers but not much known to teachers and parents. Playing cloud based games in teams build team-work skills. Most of the games have a multiplayer mode where the players collaborate with other players and trade for resources. Each player understands and plays according to the strengths and weakness of other players in their team. Playing multiplayer games together have also found to improve team based productivity in students and office workers.

Cloud based games are also found to improve fast decision making skills for the players, especially K-12 students. Research on decision-making bias found that interactive training exercises using video games actually improved participants’ general decision-making abilities and when used alongside other traditional training methods. Surprisingly in a study it is found that action games improved probabilistic inference not just for the act of gaming, but for unrelated and rather dull tasks