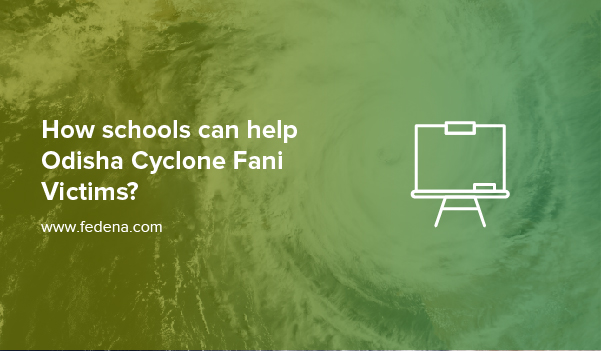 There are several ways in which schools in Odisha and beyond can help people who have been affected by Cyclone Fani. The first such way would be to start a charity fund drive. It is common knowledge that recovering from a disaster takes years and the needs tend to change over time as well. This is the reason why any nonprofit group right now would ask you to donate cash rather than items as such. This is because with the passage of time such items may not be as useful but cash would always be useful.

There are plenty of steps that schools can think of and take for purposes such as these:

If you are a high school with students over a certain age you can surely do something like this. Moreover, the teachers too can take part in this and make this a much bigger success as well. You can organize camps by yourself or you may also visit local blood donation centers that are doing such work and donate blood over there. This would help with the treatment of the affected.

This is particularly applicable for schools that are in Odisha itself. Right now in Odisha, it is highly possible that most of the pantries and grocery stores would still be in a woeful and sorry state.

It could also be that food trucks are still finding it hard to get over there. This means that there are many communities that still do not have access to uncontaminated food. This is where you can and should think of donating to the food banks. In fact, with little money, you can help feed a lot of children who are still going days without food.

3. Talking with the students

It is possible that students may have been affected by the cyclone – directly or indirectly. No matter what it is, it is very important that you talk with them and find out as much as you can about their situation.

This way, you would be able to find out more about the effect of the natural disaster and understand the impact it has had on others. Thanks to the internet these days you would be able to find a wide range of resources in this particular regard. These are all supposed to help students cope with the effects of the devastating cyclone. Over here you would also get resources and tips on how you can help the students dealing with natural disasters such as these.

As you know by now, the process of recovery would take many years to happen. This is why it is very important that you encourage others to donate to relief efforts as well. This needs to be done for the longest period of time possible. In fact, many leaders of non-profit of entities feel that with time news about the havoc that Fani has wreaked on Orissa would reduce. This way, the entire process of raising funds for them would lose momentum as well. This is where using social media can play such a major role.

This way you can keep the spotlight on the plight of the present condition of the victims as well as their future.

Amazon, one of the biggest e-commerce platforms of the world has a presence in India. As such it has set up a donation drive to help families that have been hit by the cyclone get their jobs back. You can use the Amazon app on your smartphone or tab or even make a UPI (Unified Payments Interface) payment on the platform. There is a QR (Quick Response) code that needs to be scanned for this purpose.

Zomato, one of the leading food tech companies in India has collaborated with Feeding India. It has come up with a relief drive for the cyclone hit the state.

It is aiming to provide help to victims that have been hit by Fani get back their livelihoods and it is also looking to get common people to take part in the same. You can contribute to this relief program straight through Zomato. Else, you can also sign up in order to be a volunteer so that you can provide help on the ground. You can also help them with essential items such as clothes and utensils.

Habitat for Humanity India is a nonprofit organization and in the wake of Cyclone Fani, it has pressed its rapid response team into action.

It has also mobilized volunteers in order to help with the recovery operations. Its basic aim is simple – to help rebuild the lives that have been affected by this devastating cyclone. As part of the first phase of this process of response, Habitat India is helping these families and individuals with humanitarian aid kits as well as emergency shelter kits.

Paytm, one of the biggest Fintech companies in India has opened up the possibility of making contributions to the relief efforts through its digital payments app.

You can visit the app and find out how you would be able to donate to the relief and rehabilitation program.

SEEDS India is a program that is aiming to help 100,000 people in the regions that have been affected the most by Fani. It is helping the people over there with safe drinking water, medical camps, and hygiene kits. This is a not for profit organization as well. It is primarily using local water treatment to provide safe drinking water to the people who have fallen victims in this particular context.

SOS Children’s Villages of India has set up a couple of relief camps and in the process reached out to around 1000 families that are in the most vulnerable position right now. It has created safe childcare spaces in various relief camps and children are being treated over here.

ActionAid Association too is playing a constructive role in this particular context by using its emergency response teams. They are basically doing an early assessment and trying to find what the affected people need the most right now. In fact, they have been monitoring the situation rather closely in West Bengal as well. Apart from these, you can also donate through the likes of Goonj and Ketto.