Fedena Posted on October 18, 2017 Posted in Fedena No Comments Tagged with Fedena 3.6 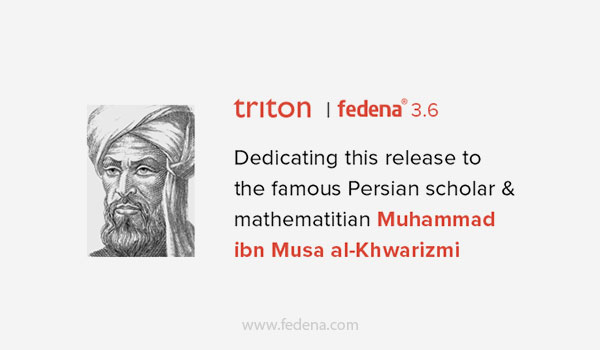 The latest update to Fedena 3.6 version has been released. We code named this release Triton, the largest natural satellite of Neptune and it is not without reason we selected this name. With this release, we are introducing the beta version of Gradebook to manage and create various types of exams. Traditionally gradebook was used by teachers to record marks of students in different exams. With the advent of digital technology, recording of marks has moved from paper to the screen but the process is still integral to any institution engaged in education. This release is dedicated to an equally important educator and mathematician from history – Muhammad ibn Musa Al-Khwarizmi

Al-Khwarizmi was a Persian scholar and mathematician from the House of Wisdom in Baghdad. While few details are known about his early life and birth, a lot of his works have been translated into Latin which helped spread them across the Middle East and Europe. He contributed to a variety of fields in his lifetime including astronomy, geography and mathematics. However, he is best remembered for a book written in 820 CE known as the Compendious Book on Calculation by Completion and Balancing (Arabic: Hisab Al-jabr w’al-muqabala). The branch of mathematics we know today as Algebra  was derived from a term Al-jabr he used in the book to denote the concept of adding numbers to both sides of the equation to consolidate or cancel terms. He popularized this concept and taught it as an independent discipline. His time was a golden phase with various developments in the fields of mathematics.

Did you know his name the words Algorithm and Algorism were derived from the latin form of this name Algoritmi?

What is new in Triton?

This all new module is developed to be used for different types of examination systems. In this beta version,  it is made compatible for the new CBSE examination system with support for other types of exams coming in upcoming releases. Exam planners are structures that allow different exam combinations. Each planner can be divided into terms and each term can have one or more exams Fee print settings allow to configure signature label, showing amount in words, custom footer text  etc. These settings can be used to configure the receipt as per the format followed by the institution.

This new feature allows reverting an archived employee back. Such a revert can be used in case an employee is deleted by mistake.

Generate a consolidated report of attendance in all subjects for a particular date range. Option to show hours attended, percentage or both.

All siblings in the institution are listed along with the contact details of father/mother/guardian. The report can be filtered class wise to take the report of siblings of each student in the class.

Note: Academic year will be first implemented in the Gradebook beta version and later adopted to other modules. You will need to link the academic year for each batches before starting to use the gradebook.

The fee defaulters report in the reports module now has a link to send an SMS reminder to users. The SMS is sent out to students (and guardians if available and enabled) with the total fees due as on date.

Fee receipt designs have been standardized to a match a uniform style and made more compact.