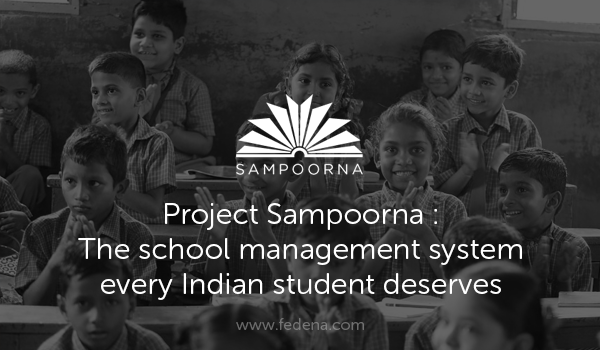 Proven results in scale and effectiveness for our nation In 2011, the Government of Kerala took on the ambitious challenge of better serving its students by more efficiently managing their school record details. The end-goal was to make previously tiresome processes more hassle-free for all administrators, from the Headmaster at the very top of the institution management to the classroom level teachers interacting directly with students.

From this vision was born Project Sampoorna, a school management system that would track the details of every student in order to enable institutions to better empower them. Sampoorna was built on Fedena’s open source database and server software and was launched under the aegis of the IT@School Project in Kerala, whose aim was to leverage technology to bring about school level transformations. The numbers involved in this project only speak to its ambitiousness – over 300, 000 teachers benefited in Kerala had the opportunity to use this system to better track and manage their students’ schooling. 70 lakh student records in 15, 000 schools across the State were tracked using the Sampoorna system.

But why was this project so important to begin with? While the processes of yore might have seemed cumbersome, they certainly were not entirely dysfunctional. Things had been carrying on without too many major mishaps. Was this yet another effort to fix something that was not entirely broken? Let’s start with a deeper than surface level look at a phenomenon most people are familiar with – the skyrocketing of school fees. This is not only a subject of popular debate at dinner table conversations, or an electoral promise made by anyone running for office, but a a primary factor in people’s individual economic decision making. The refrain from a disgruntled parent about how much he/she is spending on school for his child whose marks are not quite up to par is practically a trope now. Educational loans are one of the most utilised types of funding banks offer. Every parent aspires for their child to join a brand name school, get into a brand name college, and secure a brand name job. So it makes sense why school fees are rising and will continue to do so. There are a multitude of factors that influence this trajectory. In addition to the usual suspects – such as rising cost of living, the demand for more specialised competencies from our teachers, and the increased competitiveness students are facing with each passing day – there is a hidden cost that is not often factored into increased school fees.

School administration fees are often overlooked when considering why school fees are so high nowadays. In addition to property costs, schools are dealing with a greater number of administrative processes, from issuance of certificates to catering to the real-time information demands of increasingly involved parents. The sheer scale of these processes is hard to keep pace with, especially without the help of technological support. Anything that helps mitigate this cost is a win for everyone – from institutions who seem to be perennially struggling with budgetary budgetary concerns to parents who are making heartbreaking compromises for their child’s educational future.

This is where ambitious initiatives like Project Sampoorna come in. The robust engineering upon which the platform is built and its comprehensive technical capabilities allow schools to focus on their primary goals of educating India’s future thinkers.

What started off as a 100 day pilot programme in 2011 was found to be so effective, leaders in the Government of Kerala have now mandated the compulsory use of the Sampoorna school management software across the entire State going forward in 2017.

Educational technology initiatives are rarely this successful, especially when one factors in the massive requirement in terms of scale. Especially of note here is that this has been accomplished not by a private entity with billions of dollars of investment, but by the Government of Kerala, ensuring its democratic implementation. This is not an elitist program accessible to only a few financially blessed institutions and their equally privileged wards. Students from all walks of life in Kerala have benefited from this project and will continue to do so.

A second point of commendation is that Project Sampoorna has led to stellar financial outcomes – data shows that over $10 million dollars a year has been saved every thanks to the cost-cutting in labour and resources that the platform has allowed. Every dollar earned through this type of frugality at scale is a dollar that can be put towards resources that directly improve student learning and thus, student outcomes.

So what are the administrative functions that the State of Kerala has saved on in the last few years?

The processes the system can manage are comprehensive. Administrators can use the Sampoorna school management system to streamline previously burdensome processes like preparation of Transfer Certificates, copying of Admission Register, generation of a variety of student reports, generation of lists for numerous scholarships, preparation of SSLC examination database, preparation of student progress report, student class promotion lists and even entry forms for sporting and cultural events. Students and parents can keep a better track of their progress in school through the easily generated reports for parents, teachers and non-teaching staff who support student activity The system has become a necessary facet of everyday school functioning – teachers utilise the time table management feature that has been integrated into the software. And what can we look forward to from Sampoorna in 2017 and beyond?

Now that some existing processes have been tested in the system, the possibilities are endless. The potential of the system must be utilised at its fullest in order to ensure complete effectiveness. Whether it is ensuring its existing features to better track government spending at individual schools, or expanding the scope of the system to track more than student details, the sky’s the limit.

In a country like India, where various out of school factors like number of siblings, gender of the student, parent’s income, parent’s education, distance to school, nutrition(body mass index) etc. play a critical role than the quality of schools and teachers, Sampoorna has the capability to track student data that directly affects our ability to understand issues that truly affect educational outcomes for students. This data collection is the first step to implementing highly effective and personalised students. Sampoorna is also ready to manage the implementation of these students. For instance, tracking the implementation of a government scheme like the Mid-day Meal program utilises features that already exist in Sampoorna and have a proven track record of success.

Research shows us that education is one of the key factors in social mobility – a marker of success, especially in a country as diverse as India. For most people, education is their one route to improving their social conditions, especially for those struggling with abject poverty. Detractors might argue that spending on educational technology when students go hungry is a frivolous and foolhardy act. This is an outmoded way of thinking. Education technology helps effect real change that can transform people’s lives. It is not just a student that benefits, but their entire family, and consequently their communities. Investing in educational technology initiatives like the Government of Kerala has can make or break this country’s future.

Sampoorna’s robust technical capabilities and cost effectiveness at scale make it a highly reliable educational partner, especially for Governments that already have the reach that private entities struggle to match. Its success is not just limited to the State of Kerala, and visionary leaders from across the country must recognise that there is no reason to not expand it to the rest of India. This future ready platform is what students from across our country deserve.