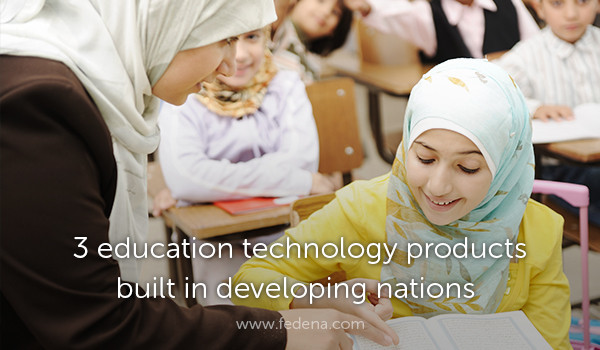 We have previously discussed how education technology is a vital ingredient when it comes to greater inclusion, especially for those from marginalised groups. The same principle holds true no matter what the scale. Whether it is your classroom or a nation on the verge of becoming a world player to be reckoned with technology is a resource that cannot be ignored.

But most educational technology is developed in the western world, where access to high-speed internet, a constant supply of electricity, and other infrastructural support is presumed to exist in plenty. Anyone who has stepped outside their first world bubble will realise this is not the case in most developing nations. This is not to say that non-western country are not technologically savvy or economically capable – the thriving economies of some African, Middle Eastern and Asian nations have been the subject of much analysis. The issue here often has to do with the comprehensive availability of infrastructural support across a nation and its people’s socio-economic classes and the consistency of its quality.

It is obvious, then, that educational technology built in the nations that they are made to support is the perfect fit for its people. These products are most likely to keep in mind the location specific constraints other products might not address, making them more useful to those who need them the most – their users.

The biggest blocker for product developers in most developing nations, even those that are economically robust, are having to deal with a much larger set of unknowns than their counterparts in more developed nations. BRCK is a portable connectivity device that helps users cope with unreliable internet and electricity connectivity issues. These two are non-negotiable requirements for most technology products, even if it is something as simple as video conferencing in a social studies professor to teach school children in Ghana about the world around them.

Developed in Nairobi, this product has now multiple copycats which only speaks to the very real need that existed in the market for such a device.

Developed in Uganda, MobiStation is billed as a classroom in a suitcase. Powered entirely by solar electricity, MobiStation enables teachers to use it in a variety of ways. It’s in-built projector and audio system can be used to play educational videos, project classroom notes, or video conference with students across the world to help build bridges amongst the youth of the nation. MobiStation also has a rich library of offline content to supplement the school curriculum and teaching material being used in the classroom, that does not require internet connectivity to be used. Features like a touchpad and stylus allow students to have a more tactile learning experience resulting in higher engagement.

Product developers in Afghanistan noticed that a lot of existing education technology on the market was relying on ubiquitous access to tablets, laptops, or high-end smartphones. While access to mobile devices is expanding at breakneck speeds in developing nations, it is foolhardy to build for a more westernised future when the present need in developing nations is critical.

In order to improve literacy amongst students, developers at one of Afghanistan’s few technology firms, developed Ustad Literacy on existing eXe open source software, to allow people with low-end brick phones to be able to have access to learning tools on their devices. This non-dependence on electricity, internet connectivity, and even cellular connectivity allow the poorest of students in the most remote areas of the world achieve literacy outcomes that keep them on par with their more privileged counterparts.

Our intent with our Learning management system – Uzity too is to make learning easier for everyone.