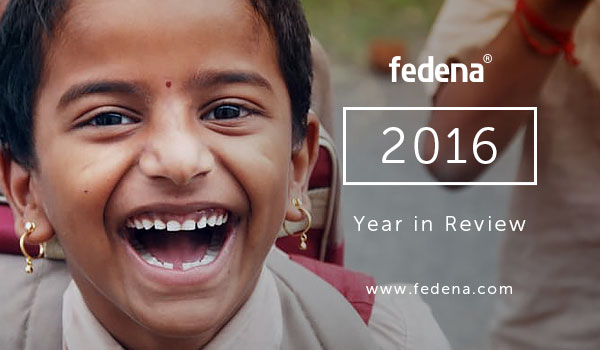 2016 has been a long and productive year. Taiwan elected their first female president, the Panama papers stunned the world of finance, Djokovic made history by holding four grand slams concurrently, Brexit, Modi demonetized India, Trump won the U.S elections, and over 200 Indian startups closed down. It’s been a roller-coaster of a year. Among all this madness, we had a few achievements as well. Here’s what kept the team behind the number one school management system busy this year:

We kicked things off with one of the biggest updates to Fedena. Fedena 3.5 released in February. We completed 7 years this April!

2,807,963 New students were admitted in schools running Fedena this year!

Our mid-year release, Namaka, Fedena 3.5.1 came out in July 2016. We dedicated this update to Savitribai Phule.

1,480,168 New Parents were introduced to Fedena to get better informed about their children’s schools, pay fees, and loads of other things!

In August we kicked off Fedena live chat support and haven’t looked back since! And finally our latest release, Fedena 3.5.2, Nix. This was one of the marquee updates to Fedena. Accompanied with a very unique plugin – The Automatic Timetable Generator With this, we bid adieu to 2016 and welcome 2017, a year with unlimited possibilities, opportunities, and growth. Here’s wishing everybody a very happy new year!