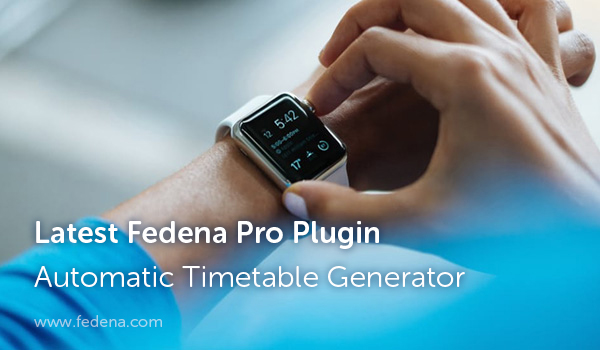 Being a school management system catering to 20,000+ schools around the world, we’ve had the time to open conversations with teachers and school administrators to better understand their pain points. After a lot of digging, we found a similar type of dialogue/remark coming our way, “I just wish we could automatically generate timetables! A school management system with automatic timetabling would be the best!”.

We feel you! So this Christmas we are spreading a little holiday cheer for school administrators and teachers around the globe with our spanking new exclusive Plugin the automatic timetable Generator. You can now save time by generating timetables of hundreds of batches under a minute with just a few clicks. A school management system with automatic timetabling!

Get in touch with us today to book this brand new plugin in Fedena!

Traditionally, schools are used to creating timetable structures over large sheets of paper for multiple batches over the course of many days and finally coming up with a timetable for the academic year. Subjects with preconditions—like physical education classes early in the morning or having 2 lab classes consecutively—are usually inserted first and then followed up with other subjects. After an initial framework is ready, the difficult process of adjusting for subject overlaps and teacher subject limits came next and this continues to be the most tedious task. Even after the advent of computers, while this work shifted from paper to excel sheets and software screens, it still is a very laborious and time-consuming process in many schools.

Those of you who have used or followed Fedena over the years might have noticed how the timetable module has evolved. It has only increased in popularity and usage with each subsequent upgrade. During all this time, however, one of the most received feature requests was the ability to auto-generate timetable entries. However, timetable scheduling is not an easy task. In computational complexity theory, it belongs to the NP-complete class of problems—which are one of the hardest to solve. Part of the reason lies in the fact a random set of subjects put in a grid does not become a timetable.

There are many factors that go into deciding where the subjects should get placed, some of them which cannot be just ‘computed’. For example, there are subjects that cannot be taught in certain timings and there are teachers who cannot be given classes at other timings. One teacher put it as the ‘emotional aspect’ of timetable generation. Many of the solutions that have tried to solve this problem did so by bringing in complicated solutions. In this first version of the automatic timetable generator, we have tried to incorporate the scenarios that schools commonly face while sticking to the Fedena philosophy, ease of use. So without further adieu let’s introduce one such setting in our new Plugin—Preferred Start Time.

Some subjects, for various reasons, are preferred to be taught within certain hours. For example, it is said that Math—particularly for the lower and middle-level class students—is best when learned in the early hours of the day. This is where Fedena allows setting the preferred start time for a subject. Using this, you can specify the timing before, after or within which a subject needs to be taught. So, by giving the preferred time as shown in the screenshot below, the algorithm will give more weight to Math appearing between 10 and 12.

This beta version is just the first step to building a solution that schools can ‘just use’. Stay tuned to the Fedena blog for more details on the timetable generator and other plugins coming in version 3.5.2. And finally, here is a quick sneak peek of a timetable getting created with this new feature.

Are you as excited as we are about it? Spread the word by sharing this and tell us what you think about this new Plugin.