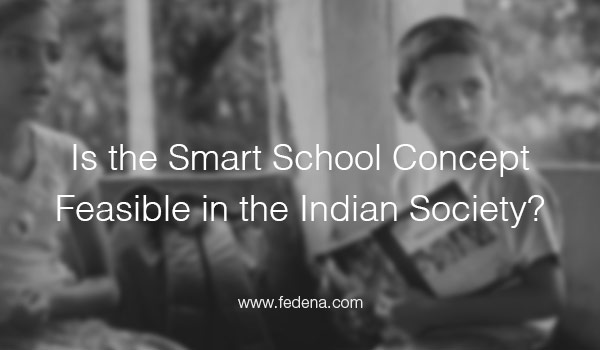 The smart school classroom – Video clips streaming through YouTube, students making presentations with teachers referring to three-dimensional (3-D) images to get across a complex concept. This is no sci-fi novel, but it is the mode of education said to be steadily replacing traditional, chalkboard classrooms in our resource-rich country. One of the most well-known schools in India adopted the shift from being a traditional school to a smart school with a lot of exhilaration. Only to discover that the electricity bills were shooting through the roof. We decided to take a balanced look at what the facts had to say about adapting to the Smart school…

A similar classroom monologue which, more often than not, triggers a collective yawn among students and the apprehension of a weekly test to fret over, traditional schools have plenty of drawbacks which the smart schools tend to overcome, but due to the lack of infrastructure in India it is becoming increasingly difficult for schools to adapt to being a smart school. Some of the contents of a smart school constitute a library of digital content, an Intranet connecting all the classrooms, state-of-the-art infrastructure for interactive resources for teachers. The teacher decides if the mode of instruction is going to be audio or visual or both. The students with their ideas and questions set their own track for learning. From primary classes to the senior secondary, teachers can assess students even before the class has ended. Also, with libraries getting IT-enabled, smart cards helping in keeping track of books issued giving the school insights on reading trends among teachers and students alike.

And it doesn’t stop just there. When carried home, the smart school system works as a virtual school, where parents, teachers and students communicate with each other. Using mobiles, tabs, social networking sites and email tools. Teachers can even upload assignments for students, and make important information available for parents to view. Students can use online forums hosted by the school to find community and discuss various activities and clubs they want to be part off. The impact of Smart schools on education is huge and cannot be disregarded.

The Information and Communication Technologies (ICT) revolution is acknowledged as the next big thing in India’s primary and secondary education sector. Education technology companies — headed by millennials — are flooding the market with teaching-learning equipment such as interactive display boards, laptops, Learning management software (LMS), school management software (SMS or School ERP), teaching and assessment software, science, maths and language laboratories and countless other products and services. The market for Edtech in India is estimated at $135 billion by 2020.

But, 52.75 per cent of schools in the country do not have electricity, 12 per cent of them are single-teacher schools and 42.75 per cent do not provide libraries/book banks of any sort.

The 18.7 per cent of India’s schools which have introduced computers to their students (Elementary Education in India 2010-11, published by the Delhi-based National University of Educational Planning and Administration), are private schools. With that being said, the biggest hurdle for any smart school in the country is the underutilization of technology and tech resources. The government is now focusing on bridging this divide – between private and government schools – through initiatives such as the Right To Education Act, Sarva Shiksha Abhiyan.

The verdict on the Smart School

It is clear that smart schools can deliver what they promise. But only if they are supported by a range of very expensive resources and infrastructure. From software to the labs that are equipped to be the learning hubs of the future and adopting schools must be prepared for the ever-skyrocketing electricity bills, that is sourced mostly from mainstream power grids. So for now, the cost to nature remains unaccounted for. All though they do seem like a necessity, sustaining smart schools is a huge challenge India will face in the coming years.