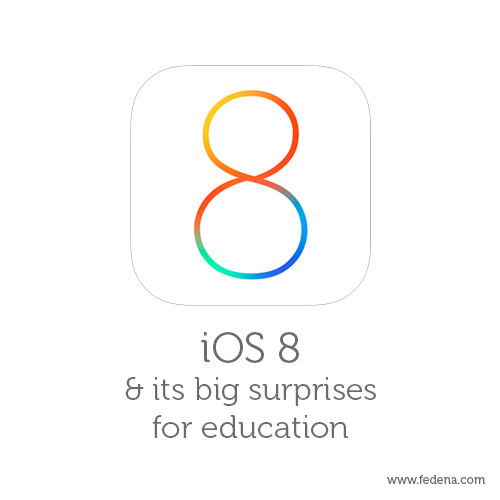 The very recent launch of the next generation mobile operating system, iOS 8 by Apple is not just a good news for the users, but has a lot in store for education too! iOS 8 will be released for iPhones and iPads. The Mac operating system will be getting the latest updated version of OS X Yosemite. In this article, we bring out to you the new updates and features of iOS 8 and what’s in store for education.

A new easy to use programming language that can motivate more and more kids into coding using Swift. App development is smarter with Swift since it is incorporated into Xcode minus the common programming error categories and can be used for creating OS X and iOS apps. So, students who are into developing apps can definitely benefit from Swift. An official iBook guide for Swift can be found here (https://itunes.apple.com/us/book/the-swift-programming-language/id881256329?mt=11)

A good competitor to cloud storage services like Google Drive or Dropbox, iCloud Drive could store all documents including ePub files and allows access to them using any Apple device and makes sharing files easier across apps. Equipped with 5GB free storage, Apple have reduced their extra storage pricing also. A good opportunity for students and educators for storing and sharing docs.

A new update for keyboards- Quick type which is a predictive text update that works in 14 various languages. Special education classes are expected to benefit a lot from this new update apart from its usual benefit to people who loves lot of texting on phone. Moreover, Apple has opened the doors to developers for keyboard customization. This definitely allows education to look forward to education-based customized keyboard.

AirDrop has been there on Macs as well as iPad and iPhone for sometime. But it lacked any kind of communication between OS X and iOS which received a makeover with iOS 8 which now allows anyone to AirDrop files from Mac to any iOS device connected within the same wireless connectivity. Imagine how helpful it will be to students who can easily AirDrop assignments to teachers using Macbook, minus the need for email address.

Schools using iPad always had tough time keeping pace with software updates made by Apple which at times required new hardware to run new software. But the new iOS 8 will run on iPad mini and iPad 2. Schools will have a good time ahead!

Some more features are expected to be there in iOS 8 that can be a positive introduction to education and they are as follows:

The latest iOS 8 update surely has a lot to offer to education, especially mobile learning. Moreover, a lot of customization opportunities awaits young developers ahead with iOS 8. Till then, lets wait for its free download to be available from Fall of 2014.