Not-so-Familiar Facts About Education Around the World

Fedena Posted on May 15, 2014 Posted in All Blogs, Edtech No Comments Tagged with Education, Facts About Education, general 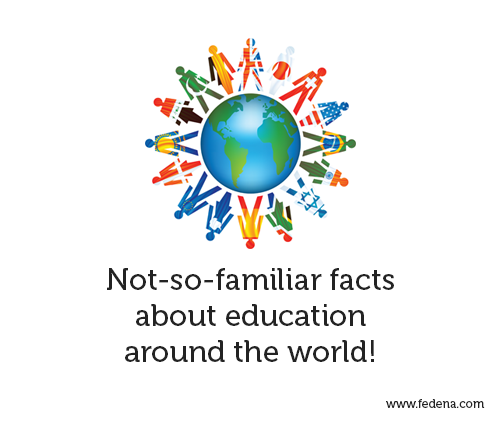 Education is one sector in the world that attracts a lot of attention- be it the education future of your kids or the education policies of a country. The condition of education is surely different in different parts of the world. While you can’t expect children from developed nations like the United States of America to worry about whether they will get access to education, a situation more prevalent in poorer nations. Children in wealthier nations are more concerned about what colleges are best for the courses of their interest. While it’s a common known fact that there is still the huge number of children who are yet to go to school; on the other hand, studies have shown that participation in education has increased over the years in all parts of the world.

These are some of the facts to be known. A see-through article will help you learn more unknown facts about education around the world:

1. The average number of years of a student in the school has shown a sharp rise in the past 10 years.

2. Study shows a growth of 600 times in the number of students getting into post-secondary education, particularly during the period of 1970 and 2008.

3. And the educational engagement has equally gone high during the same period.

4. Although the literacy rate among women is still lower than that of men, they have the number of post-secondary graduates with 78.3% in the world, a figure that is higher than the men.

Read Also: Technology in The Classroom: Decoding the Pros and Cons

5. Researches have shown a huge loss of student engagement, including both boys and girls, mainly in the primary education sector all over the world in the last 15 to 20 years.

6. On the other hand, the secondary education sector has seen decent growth in most of the major developing countries.

7. The literacy graph shows a steep rise in global literacy rates. And much thanks to the development of the education system. Perhaps, the best improvements have been tracked in the countries in South and West Asia as well as Eastern and Central Europe.