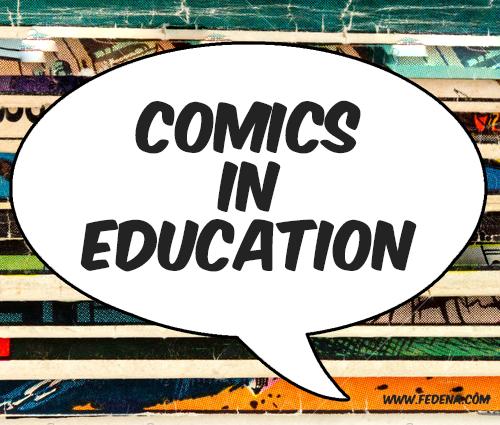 Using comics in education has been seen as a tool to instigate motivation among children. Whether usage of comics in education is actually doing any good or not, has been a long standing point of discussion among many. Various studies and researches have been carried out to prove the fact that comics can indeed grab the attention of students. The academic potential of comics was a topic of research when W.W.D. Sones, a professor with the University of Pittsburgh in 1940’s carried on a series of researches with comic books in education.

Not just Sones alone, a lot of other researchers have spent their time studying and designing comic influenced educational curriculum and this gave rise to comic characters being part of language arts workbook. The rise of the use of comics in education became so important that the entire Volume 18 of Issue 4 was dedicated to the topic by the Journal of Educational Sociology in 1944.

Negative impressions against comics was also a part of the environment with many associations voted against the use of comics in education and believed that comics can be a hurdle in the way to literacy. Even one Nebraska school principal, Lucile Rosencrans pointed out that reading comics can lead to intense eye strain and obstruct imagination and reading capabilities. But, the weight on the other side was more with an increasing number of educators supported the use in different subjects. The 1970s saw teachers getting comic books to class and soon, comics were included in reading programs like language arts, through innovative ways. Over the passing years, comics gained its popularity in the world of education and educators have found new and innovative ways to include comics in education and let kids think creatively.

The positive side of comics in education

The very advantage of comics over other literary forms is that they are visually attractive to children. All those pictures and graphics are surely more appealing to your children than those words in their book. If you take the words of Professor Sones, then comics actually increases learning, especially among children who have a low intelligence level. This is because, as believed by many experts that comics has the permanence factor to offer. Visual permanence is a specialty to comics and offers the entire control to the reader, thus helping the reader to take time and understand.

Motivation is another factor that is considered to be a benefit offered by comics. Comic books make learning easy and involve individual participation too! Children have a natural inclination towards comics and educators should make the most of it and use comics to make education fun for them.

Pictures tells a lot and we already have a proof to it- the man thought in pictures, long before when he could use words and since then, pictures speak more than words. If pictures can be used as comics to teach kids and if its really effective, then why give it a second thought!